The Server 2016 TP3 is now available and of course I tried it to see what is new and which new functionalities can we expect.
The first thing I tried was the installation and it is similar to all previous versions, but there are some new steps that I appreciated.
The first change that I like is the domain name. Now you create a non .local domain from GUI, which is very nice and useful. As you should know, in the last years is .local ending DNS name are standardized as “local computer” – that means the pc where you work. From this perspective you can expect some misfunctionalities in long term use and incompatibility with third party certificates. For this reasons it is better to use DNS domains, which you can register. You can change DNS names in the way you see on Pictures 1 and 2. 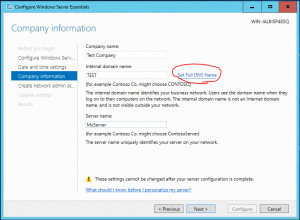 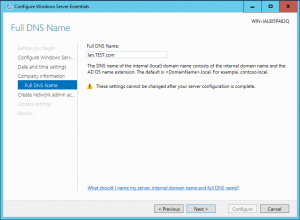 The second difference between normal server and Essentials server is, that Essentials server wants to have different login name for administrator. So as you can see in Picture 3, you have to choose the name and password for administrator. Be careful with the password. As Essentials does not use read DirSync to synchronize passwords between Office365 and local environment, you have to submit the password which is compatible with Office365 policy (8 to 16 characters and without some special characters – this is not the best, because some languages have some special characters). I hope that in future this policy will change as I want to use longer passwords and all characters like in AD passwords. This would be nice for security and it will not be a bed idea to implement some kind of DirSync. Of course the new version of Essentials server is also more integrated with Cloud as previous. There is a very nice function for Azure backup, creating VPN to Azure and some others. They are very useful for small companies as they are easy to configure and use. 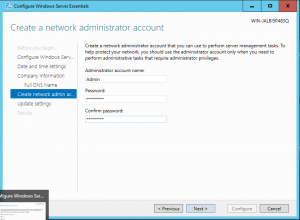 I am still convinced that a server should be the heart of the system, even when the system is a small one. I don’t want to have a router who has DNS and DHCP roles. For this reason, my advice will remain that you should transfer DNS and DHCP roles to the server and to have a control over them. Please configure a static IP on the server as in bigger AD systems – it is the same environment and it will work better. 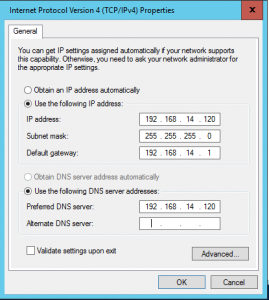 The additional new function that I very appreciate is the antimalware software. I saw many small environments without antivirus. They are convinced that there is no real danger for contamination as no one is working on it (well, they missed a lot of actions, but…). Now the antimalware is incorporated. It is not the best from the configuration perspective, but it is free of charge and it is just one click to turn it one. Please do it if you don’t plane to install any other antivirus; it is not a bad choice! 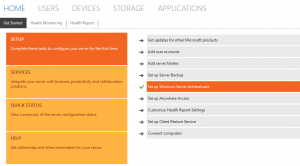 There are many new things in Server 2016; Essentials and Standard version, so you can expect a lot of posts on blogs in this days. Of course if you have time and you plan to use it, it is time to begin to discover new functionalities and test the product..