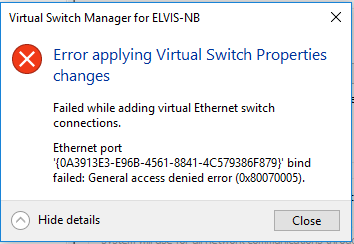 As I trust and use Kaspersky Antivirus, I had some problems in last month or two. It seems that Kaspersky is not really well integrated with Windows 10 and you have to expect some problems.
In my case, I use Kaspersky Small Office Security and this software prevents me to do a lot of actions. I found the issue when I tried to create External Network Switch in Hyper-V console – the problem is when you create a new network adapter. In this case I received an Error Access Denied – 0x80070005.
I received the same Error also when I tried to install Shrew Soft VPN Client. I was always unable to install network component due to Access Deny.  Analyzing the problem, I found that there is a problem accessing to folder INF (Change) and some other system folders, but all permissions were as they should be and there was no way to establish the right permissions to get installers work.
Well, removing Kaspersky I was able to solve the problem. But be careful, just disabling the antivirus will not be enough; you have to completely uninstall the entire antivirus and reboot the computer to correct the issue.
Hope that Kaspersky will correct the issue soon. It is my preferred antivirus program and I like it, but unfortunately it is not well integrated with Windows 10.